Ever wondered what the 10' pole in the Player's Handbook might be useful for? Well, perhaps one may come in handy when dealing with this week's monster... 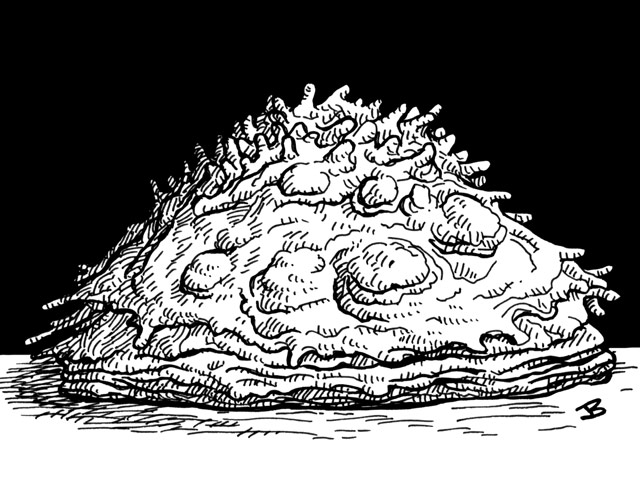 
H'malo are rumoured to be the larval form of some larger monster, although no-one is quite sure which. They prefer to live in damp dark places, where they usually move around in small groups consuming slime and moulds. They are only particularly dangerous if not approached with extreme care, as they seem to be easily alarmed. Attacks, loud noises or sudden nearby movement will cause them to release a pool of liquid that rapidly evaporates, quickly filling a 3' x 3' x 3' area with a noxious, bluish cloud. This cloud causes 1-6 hit points of damage to any creature within it, although the H'malo cannot create another cloud for 4 hours. If more than one H'malo is encountered, each creature will release their own cloud after the first is triggered. Dwarves and other subterranean creatures have discovered that this defense can be negated if the H'malo is approached slowly and quietly, and then flipped over using a pole, spear or item with a similarly long (3' +) reach. If captured in such a way, the H'malo can then be eaten only after it has been immersed in any liquid containing alcohol (beer, wine, etc) and boiled for 10 minutes. This cooking will produce such a delicious aroma that there is a 20% chance it will attract wandering monsters if being prepared in a dungeon, wood or similar place. A cooked H'malo has a similar taste and texture to roast pork or boar, although a H'malo that has recently released its defensive cloud will taste particularly noisome - similarly, any H'malo (alive or cooked) exposed to the cloud will acquire this taste. Adventurers using cooked H'malo will find that it is a useful supplement to rations, extending their duration by 2 days per H'malo carried if kept dry. H'malo are difficult to farm because of their very skittish nature and propensity to contaminate each other should one or more release their defensive cloud.

Description: H'malo are a seemingly unappetising lumpy mass that is pale blue streaked with yellow. Its underside is dark purple. When cooked, H'malo become a yellowish pink and swell to become a more uniform blob of solid flesh that can easily be sliced or cut into smaller chunks.