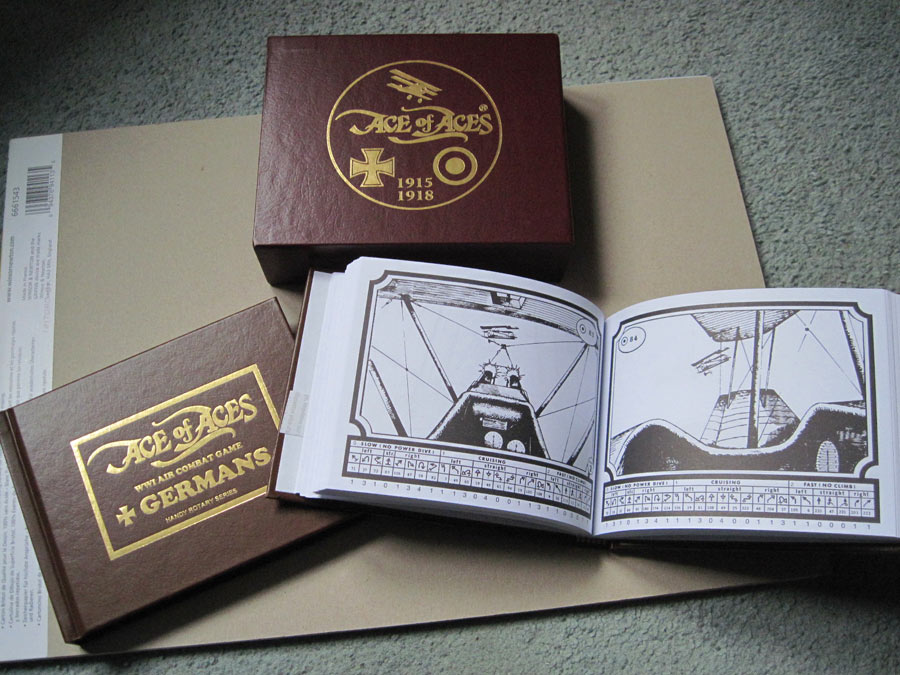 Many moons ago - okay, probably 1982 to be more specific - I was making my initial foray into playing RPGs. I seem to recall seeing either a flyer or magazine advert for 'Ace of Aces', although it was only recently that I remembered that it went by that title. Over the years, all I could actually remember about it was that it involved World War One aircraft and that I was drawn to the way it seemed to work as a game - that is, a kind of picture book that also provided instructions for turn-based action dogfighting.

Thanks to Kickstarter, however, I came back into contact with the game. Although I did miss the initial Kickstarter created by Flying Buffalo Inc, I put in an order and the very nice little box set (pictured above) arrived yesterday.

It's great to finally see the game in the flesh, and I'm very pleased by what I see thus far. I do still have to actually play the game with someone else, but that's something to look forward to. The rules seem straightforward enough, and even in single-player mode it looks like it'll be fun. If you want some idea as to how it's played, here's an example hosted by the game's designer, Alfred Leonardi.

The overall quality of the actual product is nicely done. The hand-sized books are well put together and can be stored in a sturdy box. Understated and quite minimalist in approach, you can dive straight into the game without too much fuss. The artwork may seem basic to some, but as it's doing it's best to function as a rework of the 1980 original I'm glad that Flying Buffalo decided not to go for a more modern digital facelift. I myself enjoy it's scratchiness and simplicity, and I'm very impressed with the sheer amount of work involved in creating so many illustrations. That must have been quite some task.

Once I've tried the game out with another player, I'll write up another post giving the details. If it sounds like something you'd like to play, or you want to reacquaint yourself with an old favourite, you can buy it here.

In the meantime, here's my own bit of aircraft-related illustration - my latest piece of cover artwork for Aérojournal magazine:

Posted by Jerry Boucher at 17:56 No comments: