Lately my brain has been involved with things other than RPGs (namely, creating illustrations for a book on the Paquisha War) but the recent news from WotC put the ol' grey matter back into gear.

Now, whilst I think it's great that WotC have started re-releasing the classic D&D stuff, it seems that with the White Box they've been nabbed by a trap that they keep wandering into. That is, they seem unable to not mess with things that aren't broken. More specifically, their decision to redo the cover art for the booklets seems to be another example of their weird need to mess about with things that don't need it. What was going through their minds? Why try to recreate the way D&D once looked but then think that bits of it need tweaking?

The new artwork is okay in a sort of predictable way, but asking for 150 bucks for something that seems closely akin to a bad cover version of one your favourite songs is a bit iffy, in my opinion. I've never been a fan of WotC's overall approach to D&D, and this sort of stuff doesn't do them any favours in my mind.

There's nothing wrong with the original artwork. Older versions of D&D have some measure of allure precisely because the artwork has it's own style. The styles and clichés that are more commonly associated with D&D and other fantasy RPGs were not yet entrenched. Even a website like Something Awful, which has done it's fair share of pointing out that bad stuff, still manages to note in a recent article that the old artwork has a certain odd charm. WotC seem to insist on ignoring this - or, even worse, think that supplanting the old artwork is somehow necessary.

Calling something 'Premium' does not make it better, nor does it make it seem less like a way of making a quick buck by despoiling an icon of RPG history. If you're going to do a reprint, do a faithful one.

Posted by Jerry Boucher at 16:21 No comments:

Further to my previous post about Car Wars, one of my all-time favourite digital games is Interstate '76. It seems heavily influenced by Car Wars, albeit with a tongue-in-cheek nod at things such as 'The Dukes of Hazzard' and various straight-to-video films from the '70s and '80s. The intros and cut-scenes were always very amusing...

Failing that, it's always worth it for the great music...!
Posted by Jerry Boucher at 15:47 No comments:

In Praise of... Car Wars

I've always been a big fan of Car Wars (CW). A schoolfriend had a copy and around 1982 or '83 a bunch of us played it on the big wooden table his parents had in their lounge. That said, we'd didn't play as much as I would've liked and I tended to end up having my vehicles trashed. If I remember correctly, my very first car - a Killer Kart - was pretty much vapourised by an anti-tank gun. My second, a trike, was chewed up by a Vulcan MG and my driver didn't survive the resulting high-speed Roll and Burn. Awhile back I started buying bits and bobs of CW stuff on Ebay... 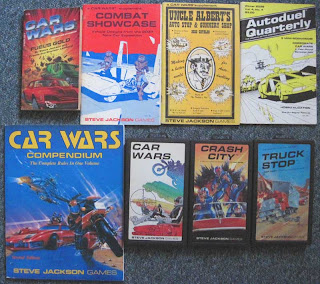 One find was the book you can see in the top left, 'Fuel's Gold'. This is a Fighting Fantasy-style game book and I only recently became aware that such books existed for CW. This dates from 1986, has a Larry Elmore cover and some pretty nice interior artwork. I've played it through a few times and it's good fun, and certainly seems to make more sense than some of the Fighting Fantasy adventures I've put myself through in the past.

One thing I've always enjoyed about CW was the system itself. Initially it seems somewhat complex, with various different things to keep an eye on when playing, but once one gets the hang of it it's a lot of fun. The later versions feature aircraft and waterborne craft, which add some nice extra detail for other ways of autodueling. The huge amount of kit that you can install and use to customise your vehicle very much widens the scope of what can happen (and the various ways to to trash or get trashed) during combat. True, it is mostly a game about combat but the scenario packs (such as Truckstop) are good at adding some layers of depth to the 'why' of autoduelling. The GURPS Autoduelling supplement is another layer of interaction with the system and the setting. The overall vibe I've always had from the game is that it's not 100% serious - if anything, the way that world of CWs evolves from the potted history given in the rules is somewhat cynical in an amusing way. At least, that's my take on it.

CW and D&D are both games that had a big impact on me when I was first introduced to RPGs, especially so in the way that they inspired me to learn how to design my own game systems. Admittedly this was partly derived - at least as far as CW was concerned - from the fact that my poor grasp of maths and keeping numbers in my head made me wonder if I could make a simpler form of a CW-style game. This ran parallel to seeing rental videos of Mad Max I and II, Damnation Alley, Battletruck, etc. In fact, the first version of my vehicle combat game was called Mad Max...

And you can see that the CW influence was still quite distinct: 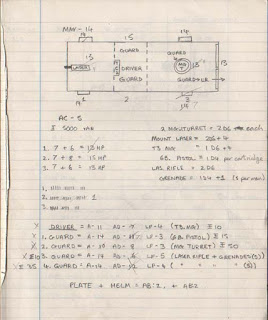 I enlisted my brother's help in fleshing out some of the rules, and the setting also changed as that happened because we wanted to have more RPG elements than was the case with CW. Our game was called 'Freeway', and a bunch of us playtested the system. At one point it was based in a post-apocalyptic future because the Earth had been attacked by aliens (the Slatzians), and so player-characters and vehicles were freedom fighters. That didn't last too long as a concept, because of 'Warlock' magazine. Issue #2 of Warlock featured a short story by Garth Nix called 'Sam, Cars and the Cuckoo' and at the time was published to set the scene for the upcoming 'Freeway Fighter' FF book.

Three things then happened. Firstly, we changed the name of our game from 'Freeway' to 'Motormania'. Secondly, our setting started to derive ideas from the Garth Nix story. Thirdly, the spot illustration above and the vehicle descriptions in the story suggested designs that were somewhat different from CW. They're more like modern armoured vehicles, albeit souped-up and stuffed to the gills with weapons, electronics, etc. But don't just take my word for it - read the original story.

From that point onwards I took the design under my wing and did a large amount of reworking. Various other RPGs (Star Frontiers, Twilight:2000) fed their influnces into it. Over the following years, the guys in my RPG group tested various different versions of 'Motormania' and in the end it amassed quite a bit of paperwork:

The story doesn't end there. I still want to go back and overhaul the system. Various bits of the it are missing and some abbreviations I used way back when have to be deciphered. Designing, redesigning and play-testing the game time after time taught me a great deal about what it takes to design a system and what you need to consider when designing a game. This stood me in very good stead when I later became involved with designing digital games.

But, strip away the layers and is still all based on a long-running interest in the quite mad fun that's inspired by autodueling and the possibilities that a great game like Car Wars suggests. There's a rumour that a new version with actual 3D counters may see life as a Kickstarter project from Steve Jackson Games...
Posted by Jerry Boucher at 14:36 3 comments: