After a bit of a hiatus, and further to my previous posts about sea dragons (here and here), it's time for... another sea dragon. For this post, I've gone for a bit of a 'weird' design, and will include details of it's crew. As always, there are sketches to give you some idea of what things look like... 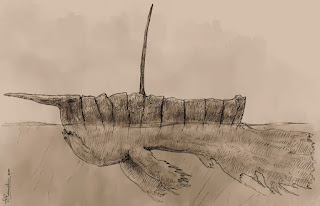 
It's not known if the Sea Horror owes its existence to magic or some quirk of adaption to the sea. The spines and scales common to other dragons have become odd masses resembling the various details of a sea-going vessel. The dragon also has a symbiotic relationship with creatures that live on it, the Kereb (see below). Both creatures roam the sea, attacking any ships they find by ramming and boarding.

Propelled by its powerful tail, the Sea Horror attacks by moving at high speed and ramming its target. Its long prow-like nose can easily pierce the side of most ships and it will also use its massive teeth to chew away below the waterline. During this time, the Kereb will seek to board the stricken vessel. The Sea Horror will also employ the spell Chaos as part of its attack, casting as a 5th Level Illusionist.

The dragon is very keen on acquiring treasure in any form. This will be stashed 'on-board', being made up of a great variety of booty acquired by the Kereb. 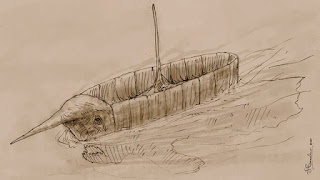 Description: the greater part of the dragon will always be below the water. That seen above will resemble brownish tarred wood and will appear to be a ship from all but close range. Bony plates extend up from it's back to form the sides, and a long spine will have all the appearance of a mast. Behind the creature's head and upper sides is a flattish area where the Kereb live and keep their treasure. The Kereb will often festoon the body of the dragon with various objects in order to make it more resemble a ship - including sails, anchors, rigging, ropes, etc.

The Kereb are a race of aquatic creatures that are usually found in the company and as the 'crew' of a Sea Horror. They may also be encountered in subterranean places, as long as they are connected to the sea.

Individual creatures do not carry treasure, but will they collectively have a hoard of Type F objects and coins.

Description: the Kereb have hard shell-like bodies, usually with pale undersides covered with darker mottles in various shades of blue, green, purple and red. These colours vary in predominance from one individual creature to another.

Posted by Jerry Boucher at 17:42 No comments: