The Life-cycle of the Gelatinous Cube... Part 3

So, after some time away from my blog, here's another gelatinous monster. This one is somewhat odd, insomuch that it has power over the Gelatinous Cube and the various other types I've described previously. It's also accompanied by a somewhat scrappy colour scribble, which will hopefully give some idea of its appearance. 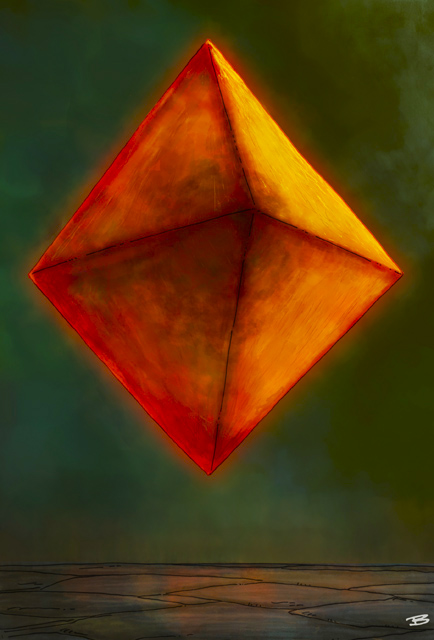 The Orange Octahedron is the stuff of legend. It is not known whether there is more than one of these dreadful creatures and it may be some unknown form of demon or the result of some dark, ancient magic. In the folklore of gnomes and dwarves, the Octahedron is the evil sibling of the fabled 'Mother of All Cubes'. It travels throughout the various Material planes, searching for its preferred treasure.

It has power over cubes and their other gelatinous incarnations, and can summon 1-6 (of any form) at will. It exudes Fear in a 5" radius (saving throw vs. wand applies) and can strike out with up to four 20-foot long pseudopods, each causing 3-18 points of damage. Any creatures touched by these requires a saving throw versus paralyzation or will be anaethetized for 5-50 melee rounds.

It usually floats several feet above any surface, although is capable of flying at greater heights. The Octahedron can be hit by all forms of weapons, and attacks by fire have normal effects. It is unaffected by cold unless it fails its saving throw, in which case their movement rate is halved. Electricity, fear, holds, paralyzation, polymorph and sleep-based attacks have no effect upon it.

Description: this creature resembles a large floating octahedron that radiates a slight orange glow. It is gelatinous, semi-transparent and covered by numerous scratches, gouges and pock marks. There is a dark mass at its centre which is made up of the magical books and scrolls it has collected over many years. It can speak the language of any intelligent creatures and will use trickery if it thinks that it may be able to add more treasure to its collection - although it is also very willing to take such items by force.
Posted by Jerry Boucher at 14:06