The Life-cycle of the Gelatinous Cube

Some creatures from the Monster Manual interest me more than others, and sometimes it's fun to wonder if they have some other form either earlier or later in their life-cycle. This got me thinking about whether this gelatinous monster only has a cube form for part of its life and, if so, would it perhaps have other shapes at some other points in time. As the cube is the same shape as a d6, I thought it'd be interesting to add other dice shapes to the mix and use them as the basis for these other forms.

This life-cycle is divided up into distinct phases: hatchling, cube, dodecahedron and icosahedron. Cubes are the most common type found in dungeons and other underground places and the creature spends most of its life in that form (I won't, of course, provide a description and stats for the cube). I'll also add in two extra creatures related to these gelatinous forms, perhaps to add a little more colour: a mysterious and very rare 'Orange Octahedron', and massive creatures called 'The Mother of All Cubes' - although they may be the stuff of legend...


The cube gains more sides as it goes through its life, and of some stages last longer than others. So:

- if a cube survives 30 years, it becomes a 12-sided dodecahedron.

- if it subsequently survives 10 years in dodecahedron form, it transforms into a 20-sided icosahedron.

As it gets older, the life-cycles get shorter – the trade-off being that it also gets more intelligent and becomes a more active predator. Stats and descriptions for the 12- and 20-sided versions will feature in an upcoming post.*

What I've written below could be seen as slightly tongue-in-cheek, or could be played completely straight. Either way, hopefully it might give your players something to figure out and/or fight against. As with my other creature designs, the stats and descriptions are written up in 1E AD&D format, but should be easy to convert to your preferred system. I'll add to this series in further blog posts. 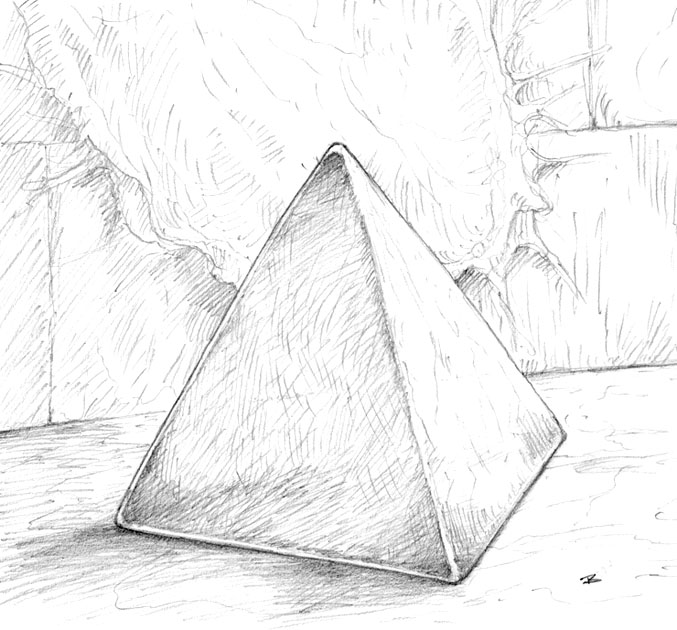 Once every other year, a gelatinous cube will produce young in the form of hatchlings. A small blister will appear on the exterior of the cube and this will become detached as the creature moves from place to place. The resulting coccon will appear to be a large semi-transparent mass attached to a wall or other surface by various stringy tendrils. Closer study of this mass will show the hatchlings moving around inside, and anyone striking or puncturing its somewhat fragile shell will suffer 1-3 points of damage as it bursts and showers them with the liquid it contains. If undisturbed, the blister will rupture naturally after 3 days, and 3-18 fully-fledged hatchlings will break out and begin scouring for food. They remain in this form for 3 months, after which they hide in some dark, out of the way place and transform into their larger cubic form.

Hatchlings are only particularly dangerous if encountered in large groups, or if a number of them encounter sleeping adventurers. Coming into contact with a hatchling will require a saving throw versus paralyzation or the creature touched is anaethetized for 1-8 melee rounds. The hatchling will then attempt to digest some part of their victim, inflicting damage as it does so. Their bodies are not particularly adept at picking up solid objects, so their treasure will usually consist of nothing heavier than a few copper pieces.

Hatchlings can be hit by all forms of weapons, and attacks by fire have normal effects. They are unaffected by cold unless they fail their saving throw, in which case their movement rate is halved. Electricity, fear, holds, paralyzation, polymorph and sleep-based attacks have no effect upon them.

Description: hatchlings resemble transparent tetrahedrons, altough with somewhat rounded edges. After leaving the cocoon they are semi-transparent for several hours, and after that time their apparent opacity is patchy and noticable in certain lighting conditions.