This week's monster prefers to seek out very particular victims... 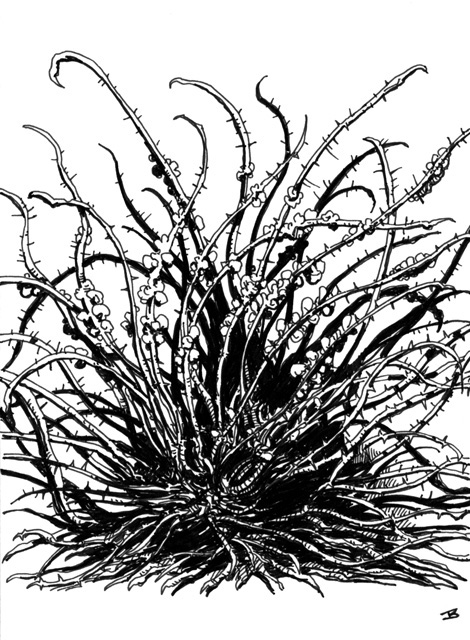 
Witches' Nests are malevolent creatures that appear to be a dense, weed-like bush in form festooned with oddly-shaped pods. They live only in dungeons and similar places, particularly wherever evil magic has been practised. They are especially dangerous to Magic Users or anyone in possession of a magic item, as they are drawn to magical forces. When attacking, they lash out with 6' whip-like thorny limbs, and a successful hit will paralyze their victim if they fail a save vs. paralyzation. Although immune to fire and cold, it can be harmed by electrical attacks. Should the nest lose 75% of its hit points, it will cause its pods to create a great deal of blinding light (as per a Continual Light spell) and endeavour to retreat. If killed, the greater mass of the Nest will quickly become dessicated and wither away to dust, but 8-64 pods will remain along with whatever treasure has been left by previous victims. If the pods are dried, crushed to a powder and added to water, drinking the resulting mixture grants infravision for 1-4 hours to anyone who does not possess this ability. Those that do already possess that ability will find its range doubled for 1-4 hours. However, 12 pods are required per mixture and it may only be taken once every 24 hours.

Description: Witches' Nests are an unruly mass of fibrous matt black limbs, with blood red thorns. Its pods are yellow and resemble indistinct, misshapen faces
Posted by Jerry Boucher at 16:49