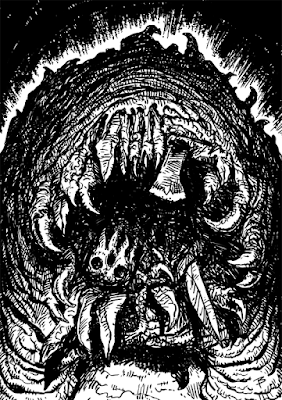 Thought to be related in some way to the Shambling Mound, this creature is found in tombs, dungeons and similar underground places. It uses the detritus from such to form its body.
The Mouth has a voracious appetite and will readily consume anything it can find, but seems to have a predilection for living flesh. Its bite inflicts 2-20 points of damage per successful strike, and on a roll of 20 it will attempt to eat its victim, inflicting a further 2-20 points of damage per round.
These creatures are immune to attacks by any form of edged weapon, and blunt weapons inflict only half damage. It is immune to cold-based attacks and fire-based attacks also inflict only half damage. When the creature dies, it immediately collapses into a reeking mass, and anyone within 20' must make a saving throw vs poison or be immobilised (by retching and vomiting) for 1-6 rounds. Its treasure is whatever survived when previous victims were consumed.
Description: Shambling Mouths appear as a large reeking mass made of bones, teeth, hair, skin, armour, pieces of metal, weapons, etc, all supported by two or three short legs. This mass is dominated by a huge maw lined with a oddly deformed teeth, metal shards and shattered bone. It is 6' tall and about 6' wide.
Posted by Jerry Boucher at 15:56