Here is another in my series that describes chitinous dragons (previous posts can be found here): 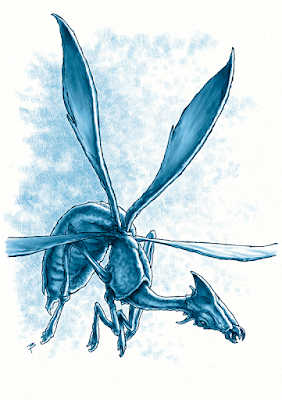 
Weaver Dragons prefer lonely mountains and other high, remote places. Their lairs are made up of a large, dense web-like structure spun between two high points or within a crevasse, with their treasure kept in numerous (2-20), hard to reach nests.

As they spend much of their time on the wing, their attacks will predominantly come from above. Its breath weapon is a mass of sticky, web-like material 6" long, 4" wide and 5" high that rapidly contracts around a victim, inflicting 1-8 points of damage per round. This can be removed with sharp instruments or by those possessing a Strength of 17 or more. It can also bite or strike out its powerful rear legs, whose talons inflict 2-12 points of damage. If the dragon can speak and employ magic, they will know 1-3 Druid spells of 3rd to 5th level.
Weaver Dragons prefer to shun any form of contact and, despite their somewhat fearsome appearance, are generally quite aloof and distant in their mannerisms. However, they are generally amiable to dwarves and gnomes and might converse with any they encounter in an adventuring party. Even then, they will stay airborne unless they are met in their lair. They will have an intimate knowledge of the landscape around this lair, out to a distance of 100 miles, and thus could be a source of useful information. On very rare occasions, should decide or be convinced to assist in some way, a Weaver Dragon might offer to carry one or two individuals no further than 100 miles. They speak Common, Dwarven and Gnomish, as well as having their own language. If two are encountered, it will be a mating pair.
The web-like material from which their lairs are woven can be worked and formed into armour or a shield, although artificers who can perform such a task are rare and very expensive. These items are treated as if they were magical, a complete set of armour (weighing 50 gp) being +5 and shields (weighing 10 gp) +3 respectively. Unless painted, this armour is always whitish-grey. Alternatively, every 100 years a dragon will weave a suit of personalised armour or a shield for an individual who has provided them with some great service or act of friendship (it is left to the Dungeon Master to decide how this might occur).
Description: Weaver Dragons are generally a rusty-red colour with patches of dark yellow. The tips of their wings and limbs are blue-green. As they reach the end of their lifespan (approximately 400 years), they become whitish-yellow.
Posted by Jerry Boucher at 16:09