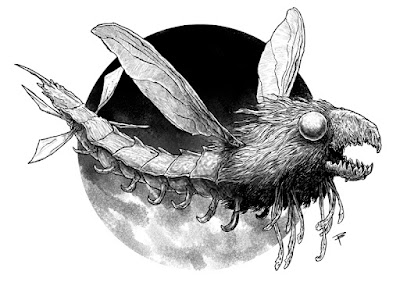 Ironbeaks are such an ungainly mix of shapes and forms that some believe them to be the result of a magical experiment gone awry. They live in mountainous areas and subsist on minerals that they leach from the rock itself, and their presence is usually an indication that iron ore can be found nearby. They can prove to be a danger to adventuring parties because of their predilection for refined metals, especially steel.
When attacking they will always focus on the most heavily armed or armoured opponent first. It can attack with its beak, which inflicts 1-10 points of damage, or grapple with its numerous tentacles. Each of these delivers a paralysing attack, and its victim must save vs paralysation or become immobile. Otherwise they may attempt to roll below their Strength in order to break free. The tentacles then secret a powerful acid which instantly reduces metals to so many dessicated flakes. Fumbled attacks against the creature from its front quarter mean that any weapon has become entangled within these tentacles and any metal component will similarly be reduced to nothing. Magical weapons and armour are somewhat more resilient to the acid and have a 10% chance for each plus the possess of surviving intact, i.e. a +2 sword has a 20% chance of remaining intact. However, this must be rolled for every round that they are exposed to the acid. The acid also affects weapons and objects made from stone or minerals (including precious stones and minerals, except diamond), completely consuming them in two rounds.  The rearmost part of the creature is less resilient than its forequarter but does end in a sharp, curved talon that can inflict 1-10 points of damage.
Should the Ironbeak be engaged in combat but then lose more than 75% of its hit points, it will attempt to fly away. If any victim is still within the grasp of its tentacles, it has a 20% chance per round of making a successful escape attempt whilst grasping its prey, but its attacks are reduced to 1 in that time. If its victim is not paralysed they must roll below their Strength score in order to break free, but are possibly at risk of injury from falling. The Ironbeak will fly to its lair and kill any victim on the wing.
Ironbeaks will usually be encountered singularly, but should two of them be present it will be a mating pair. The creatures lair will be a rocky nest atop some high point and any treasure found there will be what remains of their victim's possessions. If a mating pair is encountered in their lair, they will be accompanied by 1-3 young who, whilst not possessing tentacles, can still deliver 1-3 points of damage with their beak or talon. Each possesses 3 hit points.
Description: Ironbeaks possess coarse fur that is reddish-mauve in colour. Their tentacles are a sickly yellow-white and their large globular compound eyes are green edged with orange. The rearmost part of their bodies are yellowish-brown, mottled with patches of deep crimson. Their insect-like limbs and wings are dark greenish-black. Their beak and talon is a blackish blue edged with a raw copper-like colour. Both are very resilient and are composed of the metals and minerals on which the creature feasts. If removed, the beak weighs 50lb, the talon 10lb and, should a specialist artificer be found and hired, they can be used to make +2 weapons or armour.
Posted by Jerry Boucher at 16:43