Further to my previous post, here is another tomb guardian... 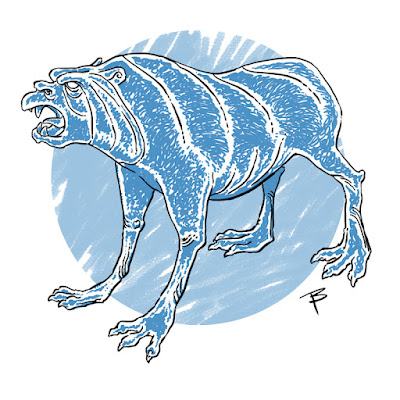 NO. OF ATTACKS: 3 or special

On first appearance, Barrow Dogs appear to be earthenware statues depicting a seated animal of a form loosely resembling a dog. They are placed in a wide variety of locations within tombs, e.g. flanking doorways and similar entrances, guarding sarcophagi or remains, and also sometimes placed on pillars, platforms or pedestals. They might also be placed at the exterior of a tomb, perhaps resembling a gargoyle or grotesque in such a setting. A hound will remain dormant until something or someone triggers some preset condition decided upon by the Dungeon Master to suit their particular adventure or situation. So, for example, a guardian might only be activated when a tomb is opened in some way, or if anything passes within a certain distance of the guardian, or if something (i.e. treasure etc) is touched or removed from a tomb.
Once activated, a ghostly howl will sound (audible to any creature within 4"), the Hound's eyes will become balls of fire and a strange light will seem to glow dimly within its mouth. It will attack with claws (2-8) or by biting (2-12) and will fight until destroyed. It will relentlessly pursue any fleeing or retreating quarry until that quarry moves a certain preset distance, or passes beyond a certain preset point, or is killed. It may also choose to attack by emitting a fireball-like object from its mouth. This has a range of 6" and inflicts 2-12 points of damage. However, it can only attack in this way every other round.
Barrow Hounds are immune to edged weapons but maces, clubs and similar weapons affect them normally. They are also immune to fire-based attacks, magical or mundane. If they are destroyed in their dormant state (in which they posses only 8 hit points), they will crumble into pieces. However, this will release a small fireball that rises 4 feet into the air and then explodes. Anything within 1" of this explosion will receive 2-12 points of damage.
Description: When dormant, Barrow Hounds appear to be quite crudely-made hollow figures constructed from fired clay, and posed as if sitting. Despite their name, they only resemble dogs in a rather distorted way, being misshapen and with odd details such as overly large teeth, wide eyes and gaping mouths. Some might be decorated with paint or gold leaf and all have incised details picked out along their bodies. These glow when the creature is active.
Posted by Jerry Boucher at 13:54