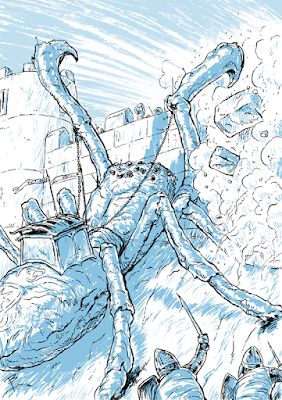 It is not known whether these creatures owe their huge size to some freak of nature, breeding or from magical experimentation. They are usually encountered during battles but may also be met as part of an army or large war party en-route to some battlefield.
Siege Spiders are trained from birth to be inured to rigours and terrors of warfare, and they seem to know no fear. Training them is a specialised task and takes at least 5 years, during which time the spider learns to take commands only from the specific individuals who eventually become their controllers. This is always a team of four: the commander (who makes tactical decisions and issues orders), the drummer (who beats the orders as a code onto the carapace of the spider, which the creature then responds to) and two 'drivers' (who each pull on huge chains fixed to the left and right foreleg, reinforcing the orders transmitted by the drummer. These chains can only be pulled by those with a Strength of 18/75-00). Should any member of the team be killed, it can take up to 2 years to train the spider to follow orders from a new individual.
During combat, the team resides within with a specially constructed and armoured howdah, effectively a small bunker riveted onto the back of spider, which also contains a signaller (who sends and receives messages using various methods to and from other howdahs, or from the higher chain of command). In this manner, Siege Spiders act as semi-independent units tasked with the dismantling and destruction of enemy fortifications. They usually do not climb over these but instead are trained to stand against walls, etc as they endeavour to breach them. Some howdahs form the base of larger siege towers and some armies add large metal spikes and other objects to the spider's body in order to guard against attacks or to enhance its offensive capabilities. Against weaker defences the weight of the spider is sometimes enough to breach them.
The creature is generally similar to other spiders in overall shape except that its two forelegs are 30' long and end in large hook-like talon, each capable of prising apart or smashing stone and mortar and delivering 6-60 points of damage. Despite their size, these are particularly dextrous. Siege Spiders are usually black or darker shades of brown, purple or blue in colour, with vivid red undersides and yellow-white talons. However, it is common for armies to paint them in other colours or to decorate them with various patterns, flags, banners or slogans. The creature's chitin is also thick enough to have designs permanently carved into it. The remains of dead Siege Spiders can be repurposed as armour for others of their kind or made into suits and shields, usually of AC3 or 4.
Siege Spiders do not spin webs nor do they possess a venomous bite as adults. Their fangs are very small compared to their overall size and they can consume the flesh of most creatures, living or dead. They have many eyes are can see equally well in both day and night. They are immune to fire (magical or mundane) and are unaffected by Cold or Fear-based Spells. Lightning-based attacks inflict only half damage.
These creatures are very highly prized as eggs or hatchlings, fetching as much as 50-80,000 gold pieces per individual. Hatchlings are usually pale blue or yellow in colour, some 4-6' in size, are AC4 and have 4HD. Unlike their adult form, they possess a venomous bite and those bitten must save vs poison or die instantly. Their fangs and each forearm deliver 1-8 points of damage. Siege Spiders give birth to 2-6 hatchlings but only breed once every 10 years, whilst they themselves normally have a lifespan of 30-50 years.
Posted by Jerry Boucher at 16:33